Celebrating Thirty Years of the ADA 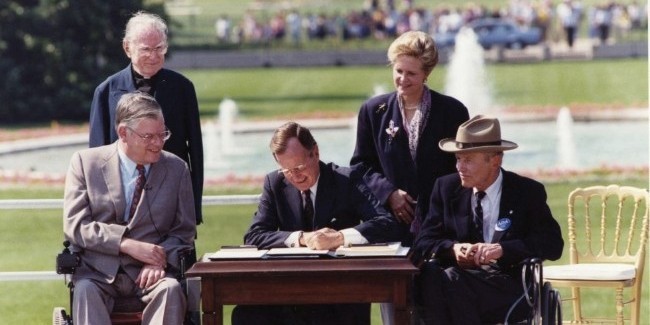 Thirty years ago, this month, President George H.W. Bush signed landmark legislation aimed at increasing access and opportunity for people with disabilities, the Americans with Disabilities Act (ADA). At the signing, he stated: “every man, woman and child with a disability can now pass through once-closed doors into a bright new era of equality, independence and freedom.”

In the 30 years since, the ADA has made a positive difference in the lives of those with disabilities by providing better access to transportation, office buildings restaurants and more. The ADA imposed specific requirements for public transportation systems and, over the decades, accessibility on vehicles and at facilities has made progress. Kneeling buses, low floors on light-rail cars, handrails, driver or automated stop announcements, smartphone apps and tactile strips along platform edges are just a few of the technological advances that have helped make public transportation more accessible for people with disabilities.

In this issue of Passenger Transport, APTA members discuss their perspectives on what this legislation means to them, and how it has changed the way they live, work and play by answering this question: “As the public transit industry reflects on the 30th anniversary of the passing into law of the Americans with Disabilities Act (ADA), how has the increased mobility and inclusion of people with disabilities in America impacted you and your work in the industry?” View the full Passenger Transport issue by clicking the link provided below.