Public Transit May Not Bring a High Risk of Coronavirus Transmission 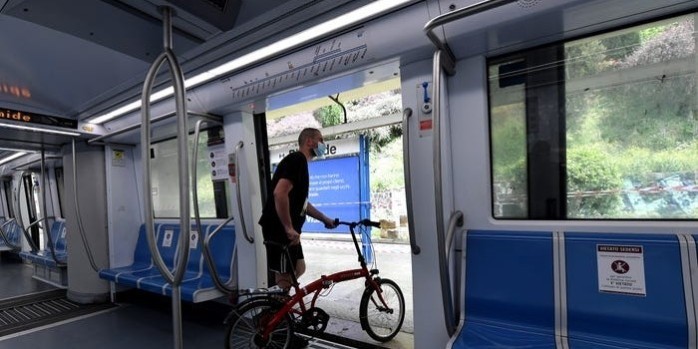 As New York City began to reopen, people naturally returned to the subway. Despite concerns that the transit system boosted the coronavirus' spread at the start of the pandemic, average daily subway ridership more than tripled from April to July.

Now, research suggests the risk of transmission on public transit might be lower than initially assumed.

Contract tracing in Paris found that of 150 coronavirus outbreaks between May 9 and June 3, none were linked to the city’s public transit systems. Japan’s contact tracers, meanwhile, also found no outbreaks associated with commuter trains as of May. A similar story played out in Austria: None of the 355 outbreaks there in April and May were transit-related.

“New Yorkers are voting with their feet,” Mayor Bill de Blasio said in reference to the city’s increased ridership in June. Mass transit, he added, is still the “heartbeat of the city.”

As more people resume their daily commutes or venture outside their neighborhoods, epidemiologists suggest a few ways to reduce the risk of infection on public transportation: Wear a mask at all times, choose the least crowded transit option, make the trip as short as possible, and prioritize well-ventilated subway cars or buses.

The duration of a trip matters

Data about the role of transit in spreading the coronavirus is difficult to gather. In contact tracing, people are more likely to recall encounters with a coworker or family member than a person they sat next to among a sea of commuters. They’re also unlikely to know the people they’ve shared a train with, making it difficult for experts to track and test those individuals. So the risk of subway ridership could be underestimated.

Still, it’s safe to assume that the longer a commute, the higher the risk.

“The nature of having a long subway or bus ride is that you will be around people for more than 15 minutes in close proximity to them, so those are going to be transmission risks,” Scott Weisenberg, an infectious-disease specialist at NYU Langone Health, told Business Insider.

Researchers at the University of Southampton recently attempted to trace the virus’ spread among people who sat within three rows of an infected person on China’s high-speed trains. On average, the infection rate was around 0.32%, they found. But the rate increased by 0.15% every hour passengers remained onboard.

The risk also rose with proximity to an infected person. Passengers sitting next to the sick person had the highest infection rate: 3.5%. People in the same row had an infection rate of 1.5%. (The study didn’t account for whether passengers wore face masks.)

That risk is still relatively low compared to other settings: Chinese researchers estimated that the infection rate for people who share the same residential address was around 17%. An outbreak at an Israeli high school in May had an infection rate of 13%, while several church events in Arkansas were found to have infection rates of at least 38%. At an overnight camp in Georgia, 44% of people got sick, and at least 53% caught the virus at a choir practice in Washington.

Weisenberg said his first priority when deciding whether to take the subway or bus is crowd size.

“In my neighborhood, the buses are much more crowded than the subways right now, so I would consider those higher risks,” he said.

Some subway systems have instituted social-distancing guidelines. In Rome, for example, authorities placed stickers to block off seats. But most residents there use private cars, motorcycles, or taxis to get around anyway, according to the International Association of Public Transport. Asking riders to maintain social distance might be less feasible in places like New York City or Hong Kong, where people are more transit-dependent.

Reducing the number of riders per subway car could also create pile-ups in the subway station, Weisenberg said.

“Having more buses and more subways, having more frequent [service] to the degree that they have the capacity to do that — those are ways that they can help reduce the crowding on subways rather than trying to reduce the total number of riders,” he added.

But even social distancing may not protect riders with long commutes.

The University of Southampton study determined that a distance of more than 3 feet was enough to protect passengers who spent an hour or less in the same row as an infected person. But after two hours, less than 8 feet of distance might not prevent transmission, the researchers found.

That’s partly because talking, coughing, or exhaling can release virus-laden aerosols that could linger in the air. So transit passengers could get sick just by breathing the same air as an infected person — especially if they’re in crowded, indoor areas with poor ventilation.
New York’s Metropolitan Transportation Authority has been working to improve ventilation on public transit since March. The city is replacing air filters every 36 days now, rather than every 72 days. It’s also testing new filters to see if they can kill pathogens like the coronavirus.

“With regard to the fresh air exchange rate per hour, we are in pretty good shape,” Mark Dowd, the MTA’s chief innovation officer, told Business Insider.

Many transit systems, including the MTA, have ramped up daily cleaning services. The MTA is also testing new cleaning technologies at night, like using UV lamps to sanitize subways and buses.

Research suggests that the coronavirus can survive on surfaces for several hours to several days, but surfaces aren’t the primary method of transmission.

“I encourage the MTA to do whatever they can to make the subway and buses safer. However, this is a virus that for the most part spreads from person to person through prolonged close contacts,” Weisenberg said. “All the planning in the world is not going to reduce those.”

The University of Southampton study found that passengers who immediately sat in a seat used by an infected person had an infection rate of less than 0.1%. But disinfection is still critical for high-touch surfaces like poles or the edges of seats.

“In my local subway stop, they seem to spend a lot of time cleaning the floors and windows,” Weisenberg said. “They should really be focusing on those areas that people are going to touch and then potentially infect themselves by touching their mouth or their nose.”

The best protection, he added, is one the MTA already requires: masks.

“I was taking the bus home last Friday and it was just absolutely packed person to person,” Weisenberg said. “I wore my best mask for that day.”