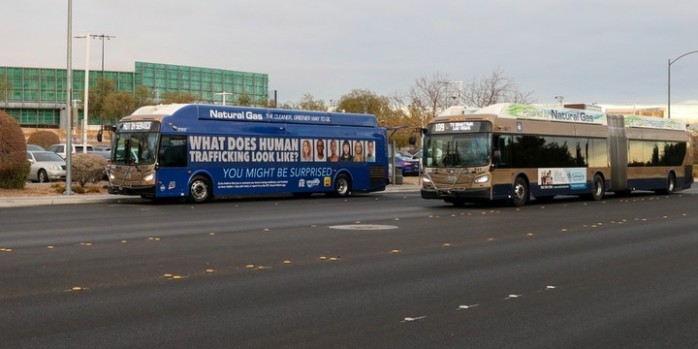 The transit industry is working to combat the issue through awareness campaigns, employee training and community outreach and education efforts. January serves as Slavery and Human Trafficking Prevention Month in the United States. The month is meant to bring public awareness and educate communities on ways to identify signs of trafficking.

The transit industry has devoted the month to highlight its efforts to combat the issue through initiatives and other awareness efforts.

In California, a state law requires transit agency employees to undergo training to know the signs of human trafficking and how to report suspected incidents. The law is modeled after a training program developed by the Santa Clara Valley Transportation Authority, which started training its employees in 2015.

The Orange County Transportation Authority (OCTA) is stepping up its ongoing efforts to combat human trafficking by fully wrapping a bus with the message to join OCTA in fighting this form of modern-day slavery through the “Be The One” (BT1) campaign. OCTA’s efforts to train coach operators and spread the message on OC Buses date back to 2014, when OCTA launched its first BT1 campaign with grant funding from the Transportation Security Administration.

In Los Angeles County, Los Angeles County Metropolitan Transportation Authority (L.A. Metro) notes human trafficking has not been widely reported on its network, but it is aware “that could change as a result of the extreme economic hardships created by the ongoing COVID-19 pandemic.”

In Nevada, the National Human Trafficking Hotline ranks the state as the 13th in the number of trafficking cases reported. The Regional Transportation Commission (RTC) of Southern Nevada, which was awarded a $160,000 grant from the Federal Transit Administration (FTA) in 2020, has launched an awareness campaign educating community members on what to do if they believe someone is being trafficked while using public transit.

“Traffickers rely on the transportation industry in every phase of human trafficking, from recruitment to the delivery of victims to buyers,” said RTC of Southern Nevada CEO MJ Maynard. “Public transit agencies may come in contact with victims on a regular basis, and this grant allows us to become part of the solution.”

The awareness campaign is featured across the valley’s transit stops and hubs, inside and outside of buses, on digital billboards and on social media platforms.

Additionally, RTC of Southern Nevada has trained all front-line employees, transit operators and security officers to help identify human trafficking victims and assist them in safely leaving their traffickers. The program includes partnerships with the University of Nevada, Las Vegas, Criminal Justice department to evaluate the training and FirstMed Health and Wellness, a local organization that helps provide comprehensive wrap-around relief services once a victim is identified.

Another transit provider to utilize a recent FTA grant to combat human trafficking is Greenlink in Greenville, S.C., which is in the middle of an 18-month education and awareness campaign. The effort will rollout in three phases, the first of which began in September 2020 with a survey to determine the knowledge and perception of human trafficking in Greenville County. The second phase began in December and consists of training Greenlink employees and customers on the warning signs of human trafficking and available resources should it be spotted. The final phase will begin in September 2021 with the production of an employee orientation video, as well as a follow up survey to evaluate the change in human trafficking awareness among Greenlink’s customers.

More is available on FTA’s Human Trafficking Awareness and Public Safety Initiative on its website.

If you suspect human trafficking or are a victim:

Photo Credits: The RTC of Southern Nevada awareness campaign is featured across the valley’s transit stops and hubs, inside and outside of buses, on digital billboards and on social media platforms.